A trusted brand among professional sportsmen 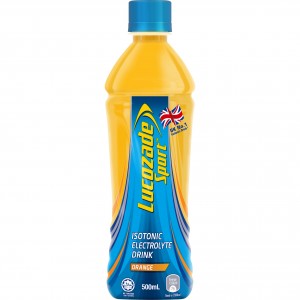 Revel and rejuvenate in the invigorating taste of Lucozade Sport

Lucozade Sport was specially formulated to improve hydration with an effective combination of carbohydrates and electrolytes. The carbohydrates are a source of energy, while the electrolytes help to replace the sodium lost in sweat during exercise. Lucozade Sport Orange allows runners and athletes to maintain our endurance performance during prolonged exercise and enjoy the exhilarating taste of orange at the same time.

The benefits of Lucozade products are based on scientific evidence substantiated by the European Food Safety Authority, generic literature, or data from human intervention studies. Whether you are a frequent gym goer or amateur sports contestant, you can enjoy the immediate benefits of hydration from the isotonic drink with the assurance of quality.